It All Started With Valerie’s

Marc Saulnier’s grandparents opened Valerie’s in Ogunquit in 1947. The iconic restaurant remained in the family until his parents sold it 50 years later in 1996. At age eight, Marc launched into the restaurant world washing dishes on a milk cart. He worked his way up the ranks, first bussing tables, then cooking and bartending, and finally landing in management.

An energetic young woman was hired to bus and wait tables at Valerie’s in 1983. Her name was Jennifer. Marc and Jennifer met over a stack of plates and forks and the rest is history. After their first son was born, Jennifer remained at the restaurant as hostess and pastry chef. Marc and Jennifer continued to work together until the sale in 1996. 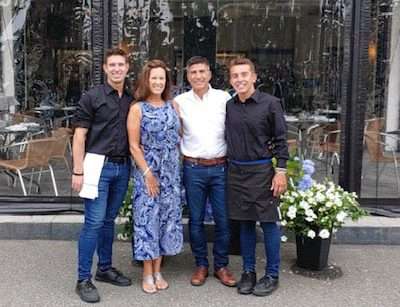 Marc transitioned into the telecommunications industry and remains in that industry as the owner of Diverse Networks which he purchased in 2005. Jennifer continued in the hospitality path working in guest relations for The Ogunquit River Plantation and The York Harbor Inn. Ever since Marc walked out the restaurant door for the last time in 1996, he always wanted to get back into the business.

Just like his grandfather and father before him, it was time for Marc to have a place he could call his own. True to their Greek heritage, Marc and Jennifer have wanted to share their love of Mediterranean cuisine. With their two sons, Nikolas and Christianos now grown, the timing was right for Nikanos.

Send us a Message